What does a great wedding and a great corporate event have in common? The answer may surprise you! 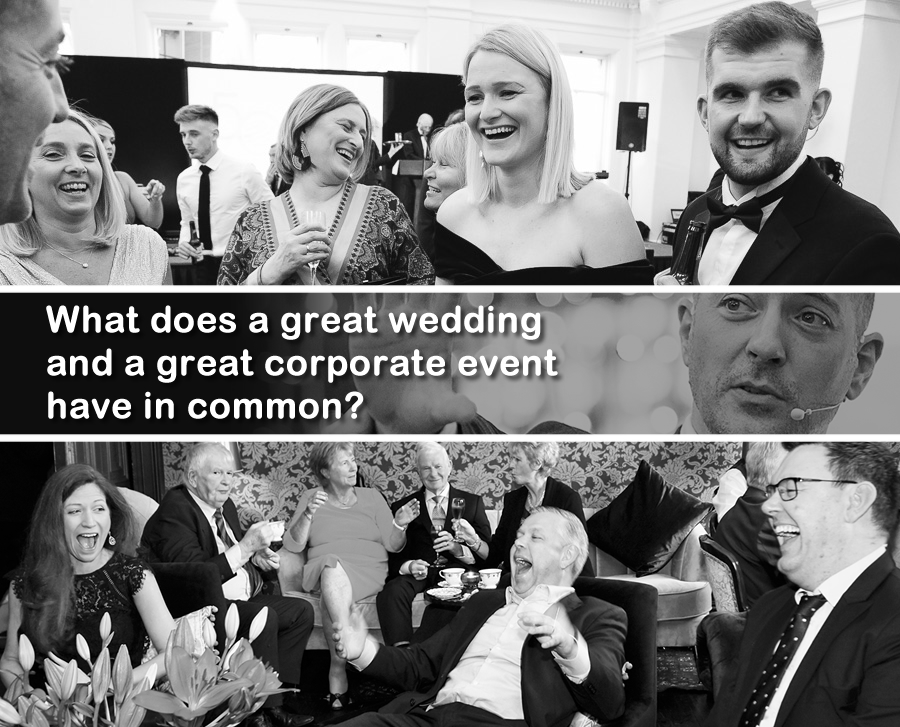 As a professional mentalist, I have the pleasure of performing at countless weddings throughout the year.

But am also called on by a wide variety of companies to add value to their various corporate events.

I was stopped in my tracks recently when someone asked me were there any similarities between the two types of celebration.

I sat down for a while to have a think, and the following are the key areas where I believe that crossover occurs – and where the successes of one type of event can be used by the other.

GETTING THE TWO TRIBES TO COME TOGETHER.

This is one of the biggest challenges facing the bride and groom when it comes to putting together a guest list – and eventually turning this into a table plan.

They may well have some friends in common, but their workmates and their extended family members will not be known to both members of the couple.

The challenge, therefore, is to turn two tribes into one for the duration of the wedding.

And it can often be harder than you might imagine.

You might arrange a great drinks reception when your guests get to your hotel or venue, but you’ll quickly notice that little cliques tend to form, with people who are already acquainted gravitating to each other.

Exactly the same thing can happen at a corporate event. Let’s say you’ve brought your national salesforce to a central location for a presentation.

During the social end of things, you’ll often find them gathering in clusters depending on their region – it’s instinctive to talk to people you know rather than strangers.

The answer, in both instances, can often be to introduce a deliberate level of disruption.

For example, make sure that the table plan forces people together, or employ a mentalist or other entertainer who can break the ice and perform in front of strangers and friends alike, bringing them closer together via a shared experience. 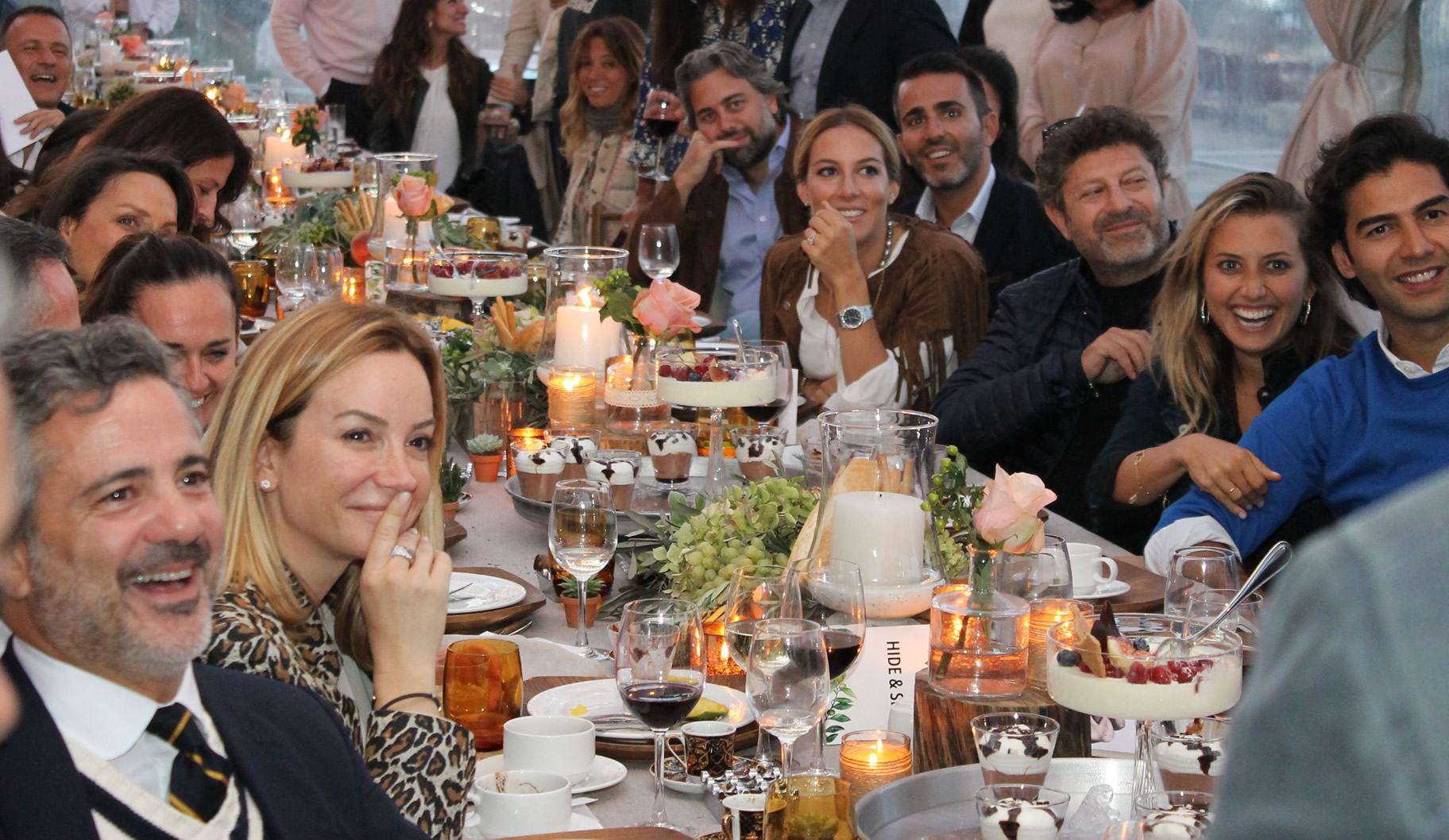 GIVE EVERYBODY A PERSONAL EXPERIENCE.

Whether we’re guests at a wedding or delegates at a conference, we like to believe that we’re welcomed as individuals rather than simply being part of the herd.

Anything you can do as the host to make sure that the guest has a personalised experience will greatly add to the enjoyment.

Examples of this include place names, a personalised information pack, or perhaps even a post-event souvenir that’s sent to the wedding guest or delegate’s home address.

GET A SINGLE MESSAGE ACROSS.

Most corporate events that you’ve attended have probably had a theme running through it – something like “Making The Company Great Again”.

This is something that can be applied with equal effect to a wedding.

By way of example, I was recently at a wedding where the bride and groom had decided that the theme should be ‘Absent Friends’.

An empty chair was set at the head table to remember the loved ones of the couple who had passed on or couldn’t be there for reasons of illness or unavailability.

The theme was amplified in the church readings – and also in the main speeches.

It was a very powerful exercise that reminded everyone present of the role that deceased parents or grandparents had played in their lives. 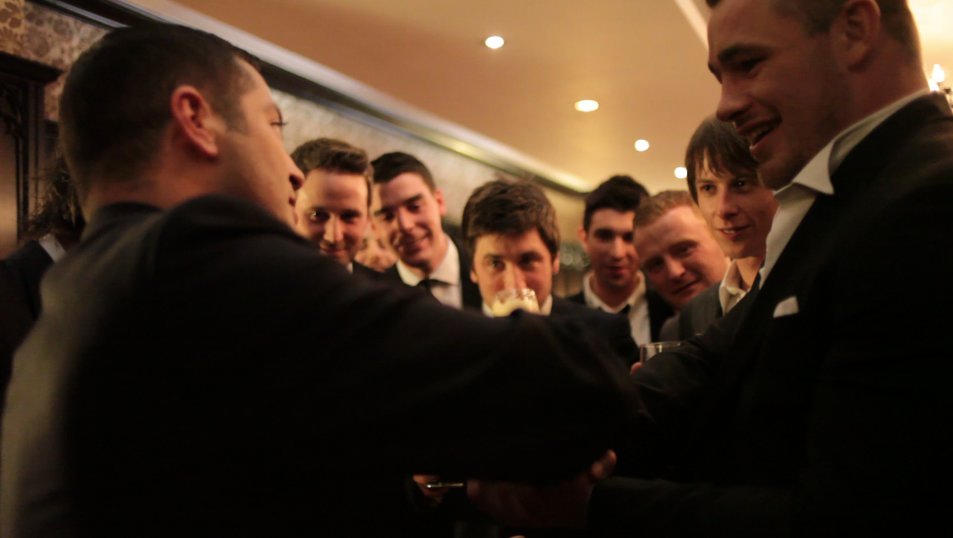 KNOW WHEN PEOPLE ARE LISTENING – AND WHEN THEY’RE NOT.

Both corporate events and weddings are noticeable in terms of how many people feel they have to make a speech.

The learning from this is to make sure that the most important figures get to speak first.

Let the M.D. speak before the Regional Sales Directors take to the podium.

And in the case of weddings, why not break with tradition and let the bride and groom say a few words first.

They’re guaranteed to get some silence, and the following speakers aren’t really that important by comparison, so a little background noise won’t really do much harm.

These four measures are not that difficult to implement, but their impact on the overall success of your event or wedding can be very significant.

So next time you find yourself organising one or the other, keep them in mind and see how much better things flow.

The bottom line from this blog is that good wedding entertainment ideas can often work brilliantly at a corporate event, while the opposite is also most definitely true.

How one of the most famous and difficult tricks of all time is now part of my virtual act.
Virtual events are not to be feared – so let’s start embracing them.
Knowing your audience – the key to a great corporate event.

Virtual events are not to be feared – so let’s start embracing them.
Magicians are for a whole range of corporate applications – not just for weddings!
Adding A Little Magic To Your Next Trade Show – 9 Good Reasons For Hiring A Mentalist.

Knowing your audience – the key to a great corporate event.